Joe McZorn retires after 50 years as a millman in the rubber industry. Joe worked for Mechanical Rubber Products from 2000 to 2005, mostly on a part-time basis. Prior to that, he worked at the acquired Minisink Rubber in Unionville, NY for nearly 30 years and originally another rubber company in Central New Jersey from the age of 18.

Joe’s explanation for retiring “my body started to give out, otherwise I’d keep working.” Joe had reduced his work hours to 1 day per week, which was approved by the company’s President Cedric Glasper. During the company Christmas party last year, Joe made the announcement that he was done. Mr. Glasper asked him what was he going to do, Joe replied “travel for a couple of weeks”, Mr. Glasper responded “then what” and Joe said “watch TV”. So, Mr. Glasper suggested for him to work at least 1 day per week whenever he felt like it. Joe agreed. 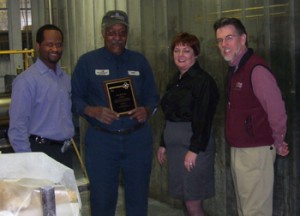 The plaque simply says “Joe McZorn over 50 years of service with a Golden Key to Mechanical Rubber Products for him to use before, during and after retirement”. Present to present the award was President/CEO Cedric Glasper, New York State Assemblywoman Anne Rabbitt, and Town of Warwick Supervisor Michael Sweeton.